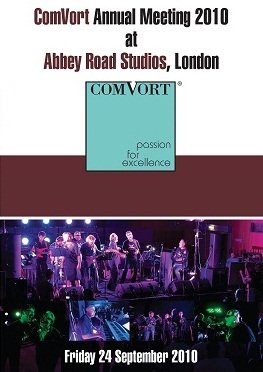 On Friday September 24th 2010, 100 delegates from ComVort, an international group of owner-operated advertising agencies gathered at Abbey Road Studios for the ultimate team building day – rock school, to learn, play and record at the world famous studios, which doesn’t open its doors to the public.

Taking to the task with relish they spent the afternoon learning 3 different tracks, which were performed and recorded, after a well-earned break for dinner, followed by the opportunity to perform with and be entertained by the rock school band, and their own house band – The ComVorts.

When they departed for all parts of the world on Sunday 26th they took with them the recorded CD package, and memories they will never forget.

Following in the footsteps of generations of legendary artists, performing and recording a song at the world- renowned Abbey Road Studios is an awe-inspiring experience. Made famous by The Beatles’ album of the same name, Abbey Road is at the heart of the British music industry and the location of countless landmark recordings. It remains one of the most technically advanced recording and mixing facilities in the world.

“Hainesnet now offers its clients the once-in-a-lifetime opportunity to perform and record a song in the very same studios used by many of the world’s greatest musicians, including The Beatles, Pink Floyd, Cliff Richard and Oasis,” says the company’s director, Philip Haines. Recently appointed by Abbey Road Studios as a preferred supplier of ‘record a song’ experiential team building days, Hainesnet is working in partnership with production company Stiff Promotions to offer a truly unique experience, tailored to each client’s individual requirements.

“To be able to play at Abbey Road Studios was an opportunity simply too good to miss,” says Jonathon Hall, a partner at London-based advertising agency The Ad Store. “It’s a global icon – the UK’s number one recording studio and the spiritual home of so many great bands.” When Jonathon was asked to host the annual conference of ComVort – a global network of owner-managed advertising agencies – he brought in Hainesnet, who had pitched the concept of the ultimate team building event at Abbey Road Studios as part of the conference for 100 delegates from 55 agencies, and 33 countries.

Guests are able to choose between a range of instruments, rock choir or lead vocals, with professional musicians and singing coaches on hand to provide tuition in small groups. Parts are carefully arranged to cater for all abilities, so that even those who have never sung or played an instrument before can take part in the final performance. “It’s a very special and unique experience,” says Kerin Purcell, Head of Brand and Marketing at Abbey Road Studios, “to be recording a song in the most famous recording studios in the world, working with the best engineers on the best equipment, in wonderful acoustic rooms.” As well as memories to last a lifetime, each guest receives a CD of the recording they have made.

“Music is the perfect metaphor for getting the team building message across,” says Jonathon Hall. “You start the day as a group of individuals many of whom you’ve never met before, and by the end you’re on stage performing together as a cohesive band. It feels like you’ve achieved the impossible and makes you realise the power of teamwork. In our case the experience led to a group of ComVort members deciding to explore how we can work more closely together in the future, pitching for business as a group rather than individually.”

ComVort’s day at Abbey Road Studios was a runaway success, delivering its business objectives and a sensational highlight to the network’s London conference. After the event, Jonathon Hall received “a whole surge of emails from people saying how amazing it was”. The final word goes to a delegate from Amsterdam, who wrote: “This was the best conference we’ve had since becoming a member… and Abbey Road, well that was fantastic, a dream. Nothing can ever top that.”